Jayson Tatum and the Celtics take on DeMar DeRozan and the Bulls tonight.

Jamal Crawford and Quentin Richardson return for a new stream of NBA HooperVision on NBA League Pass. The duo will give their unique perspectives on Wednesday’s game between the Boston Celtics and the Chicago Bulls (8ET, League Pass), taking fans inside the life of an NBA player by sharing stories from their careers and providing in-depth analysis on the matchup.

NBA HooperVision gives fans the authentic feel of watching a game with two NBA legends. Crawford and Richardson do everything from discussing the best sneakers around the league to breaking down detailed X’s and O’s during the live game. The stream usually includes a special guest, with Chris Paul being one of the most recent.

The Celtics (49-30) enter Wednesday’s matchup on a two-game win streak. Boston has been on a roll lately, winners in eight of their last 10 and currently sitting as the No. 2 in the East. The Celtics are led by their stars Jayson Tatum (27.0 ppg) and Jaylen Brown (23.7 ppg). The duo combined for 54 points in a 144-102 blowout victory over the Wizards on Sunday. Not only are the Celtics capable of putting up 144 points in a game, but they are also the best defensive team in the league posting a 106.1 rating. Getting it done on both ends of the floor is a prime reason why first-year head coach Ime Udoka is seeing so much success. Boston recently suffered a setback when it was announced that forward Robert Williams would be out for 4-6 weeks with a torn meniscus, but the team has stepped up in his absence from him. Tonight will be a tough task to slow down DeMar DeRozan and the Bulls, another playoff team in the East.

The Bulls (45-34) come into tonight’s game fresh off a 127-106 defeat to the Bucks. DeMar DeRozan poured in 40 points in the losing effort. Chicago is on a bit of a skid, posting just a 4-6 record in their last 10 games. They currently sit as No. 6 in the East heading into the final days of the season. DeRozan has been the Bulls’ most important player all season, averaging 28.2 ppg to lead the way. They will go as far as he can take them in the East. Chicago is a team that has dealt with constant injuries throughout the season to guys such as Zach LaVine, Alex Caruso, and Lonzo Ball. It was announced on Wednesday that Ball will miss the remainder of the 2021-22 season with a knee injury. LaVine is listed as a game-time decision for tonight and Chicago is hoping he’s good to go by the playoffs. Funneling through different lineups has been a challenge, but at this point, Chicago has three games left in the regular season to try and find their footing. 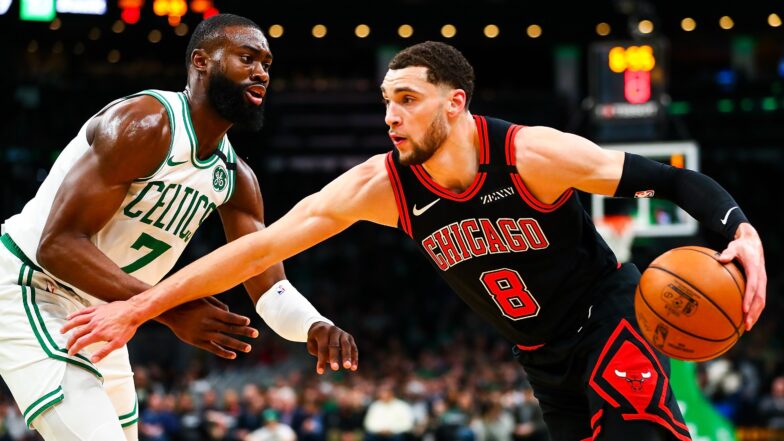 If you’re new to NBA League Pass, unlock your 7-day free trial now. Upon logging into your League Pass subscription, you’ll be able to find the alternate stream with Crawford and Richardson on the game page for Celtics-Bulls within the “Watch” tab.

Richardson and Crawford were both selected in the 2000 Draft and combined to play in more than 2,100 NBA games.

Crawford, a guard who was picked No. 8 in the Draft by the Cleveland Cavaliers and traded to the Chicago Bulls, is tied with Lou Williams as the only players in NBA history to win the Kia Sixth Man of the Year Award in three different seasons . Crawford played for the Bulls, Knicks, Warriors, Atlanta Hawks, Portland Trail Blazers, LA Clippers, Minnesota Timberwolves, Phoenix Suns and Nets in his 20-year career.

At 39, and in his final regular-season game with Phoenix, Crawford dropped 51 points in a loss to the Dallas Mavericks. That performance made him the oldest NBA player to score 50-plus points in a game, as well as the first player to score that many points off the bench in a single NBA game.

Richardson, a guard-forward combo who was picked No. 18 by the Clippers, played 13 seasons with stops in Phoenix, New York, Miami and Orlando after beginning his career in LA. He won the 2005 NBA 3-Point Contest and has gone on to a successful broadcast career, which includes co-hosting the popular “Knuckleheads” podcast.