Thanks to its panoramic views, picturesque landscapes, unspoiled nature and ancient palaces and gardens, the Amalfi Coast ranks among the most popular destinations in Italy for both Italian and international tourists. It appears as a huge terrace suspended between the cobalt blue sea and the slopes of the Lattari mountains, in a succession of valleys and promontories between coves, beaches and terraces planted with citrus, vines and olive trees.

The Amalfi Coast, also known as the “Divine”, offers local visitors and tourists a cultural and artistic heritage represented not only by great examples of architecture, but also by important natural elements, food and wine, and crafts.
Now we are going to discover 6 of the many wonders that the Amalfi Coast offers its visitors.

Amalfi is one of the most important places on the Amalfi Coast, with a glorious history. Along with Pisa, Genoa and Venice, it was one of the Maritime Republics that made the history of the Mediterranean Sea, reaching 70,000 inhabitants compared to the current 5,000. Many vestiges of the greatness of Amalfi remain: from the Arsenale, the shipyard where the ships of the fleet were built, to the Regatta of the Maritime Republics that takes place every 4 years in the waters of the city with a remarkable organization, rewarded by the positive turnout numbers. 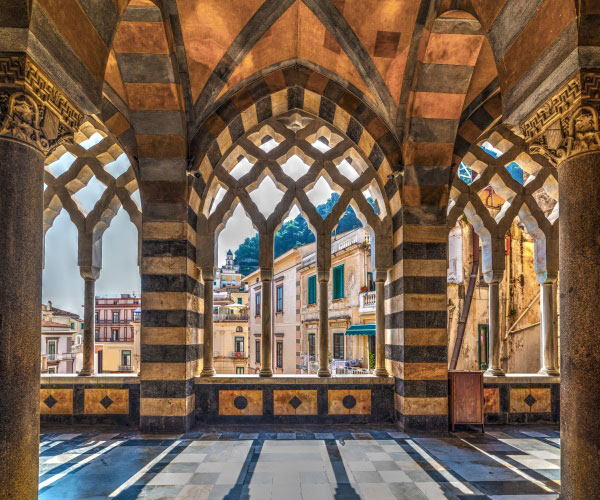 Do not miss the visit to the Cathedral of Sant’Andrea, as well as the Paper Museum. The latter is located inside one of the old mills used to process paper. The entire Sorrento Peninsula, in fact, has for centuries had an excellent paper industry that exploited the wide availability of streams in the Lattari Mountains. In the channels excavated by these water courses, paper mills were built, whose activity definitively ceased in the mid-1950s (except for a limited artisanal production that is still maintained today).

Right after Amalfi, Ravello is the ideal destination for those looking for an Amalfi Coast vacation away from the hustle and bustle that has characterized these places for years. The town, in fact, is located more than 300 meters above sea level and, in addition to the magnificent views, it enjoys a cooler climate that certainly suits those who can’t stand the summer heat. As for the things to see, they are few but of extraordinary beauty. 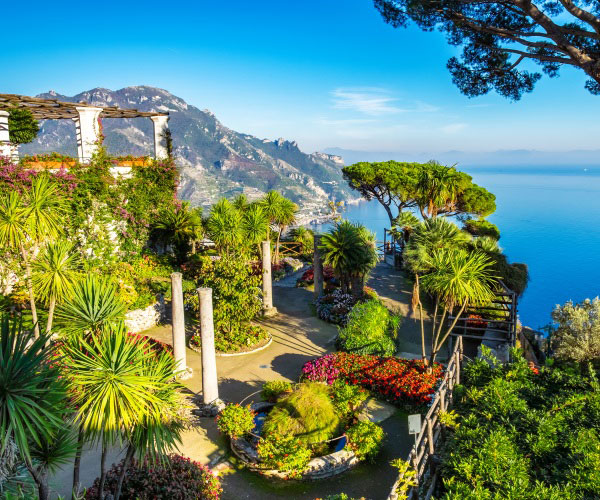 Above all, Villa Rufolo and Villa Cimbrone are two stately homes that over the years have become tourist attractions. The first hosts a series of high-level musical events, especially during the Ravello Festival, a music festival that almost completely monopolizes the tourist calendar of the town. Villa Cimbrone, on the other hand, is a charming 5-star hotel, but you can still visit the extraordinary panoramic garden (renamed “Terrace at Infinity”). The Cathedral, which dominates the main square, and the futuristic Auditorium designed by Brazilian architect Oscar Niemeyer are also worth a visit. Aloof, but not entirely out of place compared to the local architectural style, this hyper-modern structure hosts a substantial part of the Ravello Festival events mentioned above.

In terms of fame, Positano is second only to Capri. We speak, therefore, of one of the best-known tourist destinations worldwide, especially crowded during the summer months. In spring and autumn, however, Positano shows its best face, extraordinarily fascinating, especially for those who visit it for the first time. 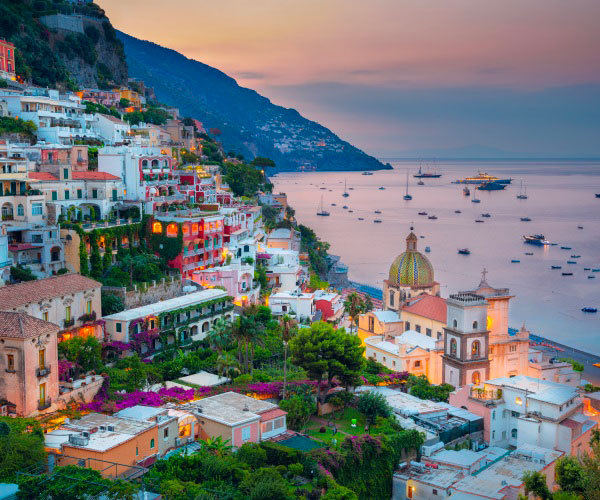 The most striking feature, in fact, is its predominant vertical development. The houses are clinging to each other, almost attached to the rock that gently reaches the sea. Strolling through its narrow streets full of boutiques and shops is an experience that is really worth it. Positano is famous throughout the world for the artisan production of clothing and sandals. Also worth visiting is the Church of Santa Maria Assunta with its dome standing out in the middle of the city. There are two main beaches: Spiaggia Grande, at the foot of the city; and the Spiaggia del Fornillo, a few minutes’ walk from the hydrofoil dock.

Less than ten kilometers from Positano, Praiano is the ideal solution for those who are looking for relaxation and tranquility during their holidays. The city is divided into two villages: Vettica, the upper part, and Marina di Praiano, near the sea. There are also two beaches: Gavitella and Marina di Praia. Despite their small size, these are exclusive, perfectly equipped beaches that also offer a variety of restaurants specializing in fresh fish and shellfish and delicious Campanula cuisine. The view and the sunset complete the idyll. Praiano, in fact, is famous for its sweeping views and fiery sunsets, almost always with Capri clearly visible in the background. It is the ideal place for a romantic vacation with the right mix of privacy and social life. 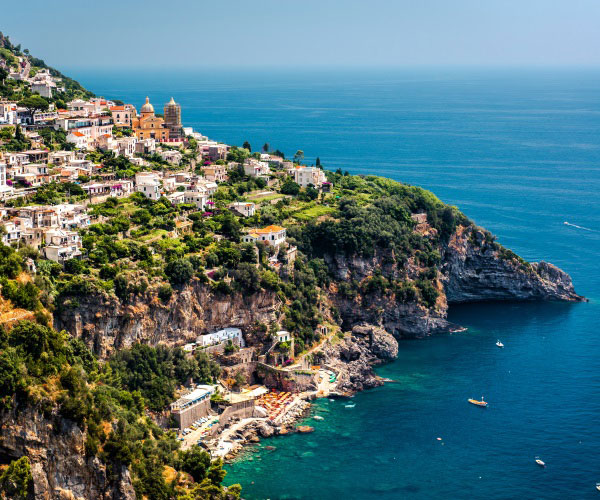 Immediately after Praiano, you come across the Fjord of Furore, an unmissable stop during a vacation on the Amalfi Coast. It is a narrow cove, carved by the incessant erosion of the Schiato River, coming from the Lattari Mountains. The fjord, now known as Marina di Furore, represents the tourist part of the city. The current town, on the other hand, is located 600 meters above sea level and can be reached via steep paths that climb from the coast inland. In fact, it is inappropriate to speak of a town since one of the characteristics of Furore is the absence of a real inhabited center. The houses and churches of this small town are scattered here and there following, in most cases, the course of the land. 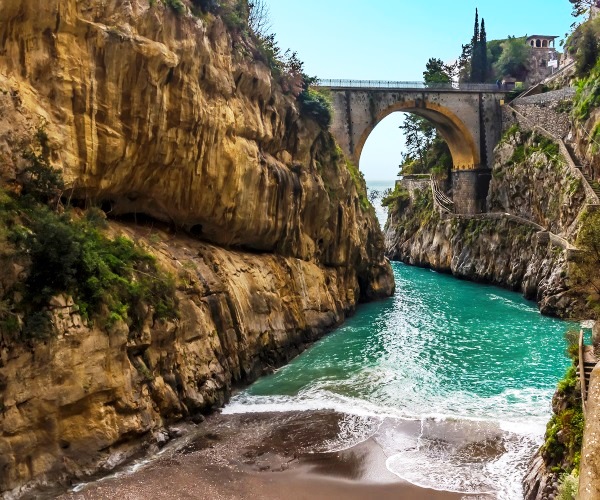 We are talking about one of the smallest towns in Italy (just over 600 inhabitants) but very proud of its history. An identity with a double soul, land (cultivation of lemons and cherry tomatoes) and sea (the “tonnara”, the traditional fishing system for catching tuna that was active until 1956), which fortunately continues to be renewed. There are several places that are worth a visit, including the beach of Marina di Conca, at the bottom of 300 steps, and above all the Emerald Grotto, a wonderful marine ravine discovered in the 1930s by a local fisherman. 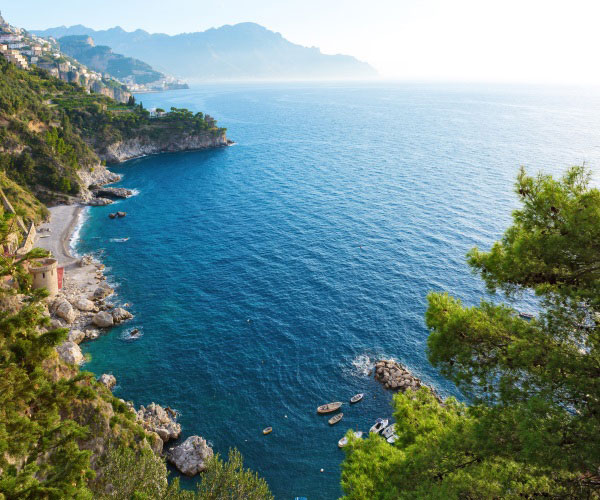 Daniela De Luca is CEO of Home in Italy. Home in Italy is a luxury villa rental company that has been offering high-end vacation villa experiences in the best regions of Italy since 1993.